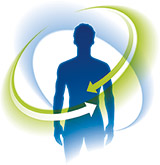 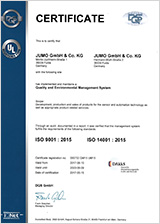 All of us, the management and employees of JUMO GmbH & Co. KG, have for many years been aware of our responsibility to protect people and the environment. This applies to our private surroundings as well as within our company. In recent years, we have done much to conserve resources, adhere to statutory and other regulations relating to the environment, and minimize damage to the environment. We plan, monitor, and evaluate our processes with regard to their environmental relevance. 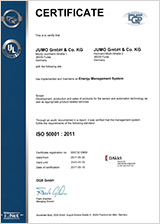 We view the manufacture of JUMO products with the lowest possible energy consumption as an important contribution to climate protection and the conservation of natural resources. For this reason, we use our energy management system to monitor and develop a consistent increase in the energy efficiency of our processes. We also generate our own energy in an environmentally friendly manner using photovoltaics and power-heat coupling. 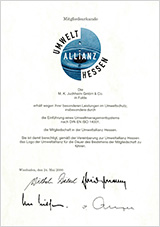 JUMO is a founder member of the Hesse environmental alliance, another area in which it plays an active role in the dialog between business and administration so as to develop corporate environmental protection that is as efficient as possible. JUMO therefore also pursues aims such as "assuming greater personal responsibility within the scope of the statutory framework conditions, conserving resources, reducing disposal costs, improved cooperation with government supervisory authorities, quick and unbureaucratic flow of information, and improvement of company image. (Environmental alliance)"

Nowadays, sustainable operations are indispensable. With the Hesse sustainability strategy, the German state of Hesse has established a platform on which different groups of society such as companies, municipalities, and schools can collaborate.

Among other aspects, the aim is to attract at least 100 companies to commit to greater climate protection and present their activities and plans for CO2 reduction in an action plan. For nearly 12 years, JUMO has documented its commitment to environmental protection with its management system according to DIN EN ISO 14001.

It was therefore only logical for JUMO to also sign the charter for climate protection in order to demonstrate that JUMO will continue to give high priority to the conservation of resources and thus protection of the climate.

With de DIN ISO 14001 certification in 1999 JUMO committed to environmental protection. Beyond the legal obligations we participate in numerous activities - especially in the field of development and production - in order to avoid the use of hazardous substances in our products and to protect resources.

The EU Directive 2011/65 / EU (RoHS II) entered into force in June 2011 and was implemented in Germany by the Electrical and Electronic Equipment Regulation; this directive divides electrical and electronic equipment into various categories. So far the JUMO product range was defined in Group 9 "Industrial Monitoring and Control Instruments" and was excluded from the RoHS Directive.

From July 22, 2017, this exception has bee deleted without substitution.

All products are now fully covered by applicable RoHS regulations and are now legally RoHS compliant.

Large parts of our product range also include the CE mark. Our sensors e.g. still do not meet the CE requirements according the EU Conformity Declaration, as they are considered as components. They are RoHS-compliant, but without the CE mark.

On request, we will gladly confirm - even product-related- that the relevant devices comply with the RoHS Directives and, if applicable, also with the EU Declaration of Conformity.

With the DIN EN ISO 14001 certification in 1999 we already took responsibility for the protection of the environment. Beside the legal obligations we refer to numerous activities - especially in the field of development and production - in order to avoid the application of hazardous substances in our products and save resources.

JUMO defines its entire product range as a component supply to the customer for further use and processing in various systems. With this mind, am marking (labeling) of products according to SJ/T 11364-2014 is not mandatory, but always a hazardous material table.

As in the past, you can find the respective operating manuals, data sheets, and approvals in the product groups on our website.
Here, the classification of the identification marking "e" or "20" as well as the associated pollutant table according to China RoHS can be found.
You can find the fabrication date ouf our products on the nameplate or in the accompanying papers.

REACH was introduced on June 1, 2007 as a new pan-European law on chemicals. This makes manufacturers and importers of chemicals responsible for the safe handling of their substances.
However, this agreement also applies to downstream users.

We are a manufacturer of devices in the field of measurement and control technology and are therefore not affected by REACH in terms of registering our products.
We do not manufacture chemical substances and, based on current knowledge, we also do not import these substances from non-EU countries.

We are a manufacturer of devices in the field of measurement and control technology and are therefore not affected by REACH in terms of registering our products.
We do not manufacture chemical substances and, based on current knowledge, we also do not import these substances from non-EU countries.

If substances listed in the current REACH Regulation (Substances of Very High Concern, SVHC) are present in our products at a level that is above the permissible limit values, our customers are immediately informed according to Article 33 of EU Regulation 1907/2006 concerning the Registration, Evaluation, Authorization, and Restriction of Chemicals.

Our products are conform to the following legal regulations 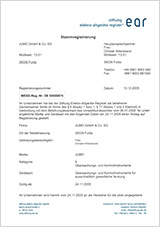 JUMO mostly produces devices for measurement and control technology.
In 2005 our products were rated at the ear as control and monitoring devices for commercial use (b2b).
According to the versions of the WEEE Directive 2012/19/EU our devices therefore do not fall under this regulation.

The sales packaging put into service by JUMO is licensed under the recognized system from BellandVision according to section 6, para. 3 of the German Packaging Ordinance (VerpackV).